Ever since the major investment in nanotechnology in the 1990s, there has been significant advancement in this area with the availability of various products, which have superior properties making them valuable for a wide range of applications. One of the major success stories of nanotechnology has been that of submicron fibers, also referred to as nanofibers in the textile industry. Polymeric submicron fibers have enormous specific surface area and high flexibility. As a result, webs containing predominantly submicron fibers have large surface-to-volume ratio, micropores, and high porosity, and hence find numerous applications in the areas of decontamination, catalysis, filtration, super absorbents, as scaffolds for tissue engineering and wound dressings, for energy storage and many electronic applications. It is estimated by various market studies that the current nanofiber market worldwide is about $400 million and will be worth more than $1 billion by 2020. This exponential growth in nanofiber markets can be realized only if they can be produced at commercially feasible rates at a lower cost.

Techniques to produce polymer submicron fibers
Polymer submicron fibers can be produced by a number of different techniques utilizing physical, chemical, thermal, and electrostatic fabrication techniques such as super drawing, templating, phase separation, vapor-phase polymerization, self-assembly, kinetically controlled solution synthesis and electrospinning. One of the successful methods has been by spinning immiscible polymers using the sea-island technique and then dissolving the matrix to leave with a bundle of nanofibers. This technique to produce yarns with silk-like properties or that of leather has been known and practiced in the industry. There is continuing research to use bicomponent fiber spinning with several islands in the sea, and then splitting, or dissolving the matrix to achieve a web of nanofibers. In this process, decent production rates of submicron fibers with relatively narrow diameter distribution can be achieved at a moderate cost. The process is limited to certain combinations of polymers and may require the use of undesirable solvents to dissolve the matrix polymer. Also, waste of the dissolved matrix and overall reduction in productivity are some of the undesirable issues of this process.

Electrospinning is the most researched topic and has been very successful in the laboratory to produce nanofibers from a wide range of polymers with unique properties [1]. The process has evolved from single jet or needle spinning to multiple needles and needleless spinning to achieve increase in productivity. Several polymers have been processed to form fairly uniform fine fiber webs with diameters as low as 50nm in some cases. However, this process is still struggling to be a commercial success, due to issues related to handling of solvents, high voltage and overall higher cost with low productivity. Another new technology that is in the early stage of development is based on centrifugal spinning. This technique claims that submicron fibers can be produced from both melt and solution based systems. However, the process consistency and control on fiber diameter and web uniformity have to be convincingly demonstrated before the process becomes a commercial success.

Melt blowing as a technology to produce microfibers has been practiced in the industry very successfully for more than two decades and has shown the potential to produce submicron fibers. Recent developments in this area are discussed in the following sections.

Melt blowing
Melt blowing is a one-step process (Figure 1), in which high-velocity hot air is used to draw the molten thermoplastic polymer fiber. A typical melt blowing process is a single integrated process, consisting of polymer-feeding systems, extruder, metering pumps, die assembly, web formation, and a collector [2]. Processing through extruder, metering pumps, filter, and up to the die assembly is quite similar to melt spinning. However, die configuration and collection systems are designed in a complete different manner. As the polymer is extruded through a linear die into converging streams of hot air, the high velocity air attenuates the fibers. The same air streams convey the fibers on to a collector. As the fibers move to the collector, they are quenched; form entanglements and bonding takes place at the fiber-to-fiber contact points, thereby forming a cohesive nonwoven web. Generally, vacuum is applied at the collector to facilitate disengagement of air from the fabric. 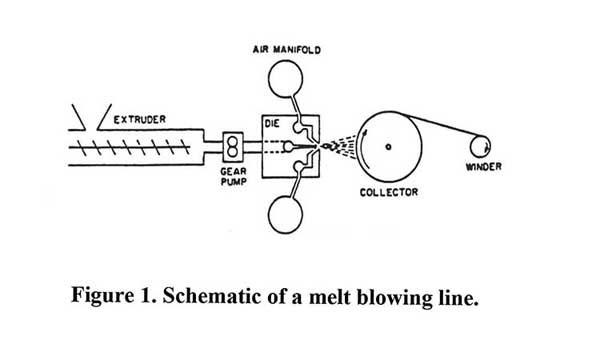 Typical melt blown webs will have fibers in the range of 2-5 microns on the average with a wide distribution in diameter. Because of the type of the polymer used and the process, the fibers are not necessarily strong, but the fabrics have good barrier properties and serve as ideal materials for filter media. Meltblown webs are extensively used either alone or as part of composite structures in fine filtration to remove finer particles and bacteria and as absorbent products for many applications.

Meltblown Nanofibers
As the melt blowing process has allowed the production of microfibers as small as 1-micron average diameter in a commercial process, there has been a continuing effort to push the technology to achieve submicron fibers. Recent efforts to design and develop modular dies with smaller holes and a larger number of holes allow the production of submicron fibers in a cost effective way. One of the modular dies consists of stacked plates, with one of the plates having an inlet for molten polymer and heated air inlets unlike the typical meltblown die with linear holes and air knives to allow the process air from both sides (Figure 2). The plates are configured to define channels to create a path through which material flows [3]. One of the plates having outlet acting as a spinneret orifice through which polymer can be extruded. Modular die operates at low throughput per hole and hence, low melt pressures for fiber extrusion. The molten polymer is extruded at extremely low flow rates through the orifice of the modular dies to produce submicron fibers.

Several thermoplastic polymers such as polypropylene (PP), polyethylene terephthalate (PET), polybutylene terephthalate (PBT) and polylactic acid (PLA) have been processed successfully using commercially available resins to produce uniform webs using pilot lines. Submicron fibers produced using modular meltblowing dies have diameters in the range of 50 nm to 1000 nm, with average diameters in the range of 400-600 nm (Figures 3 and 4). Hence, this modified melt blowing process would be a unique and novel approach to produce submicron fibers in the industrial scale from thermoplastic polymers. Fiber diameter distribution is comparable to that, and many times narrower than that, observed in typical microfiber meltblowing. Also under controlled process conditions, submicron fiber webs free of roping, shots or fiber breakage can be successfully produced continuously at production rates several times faster than that possible in electrospinning. 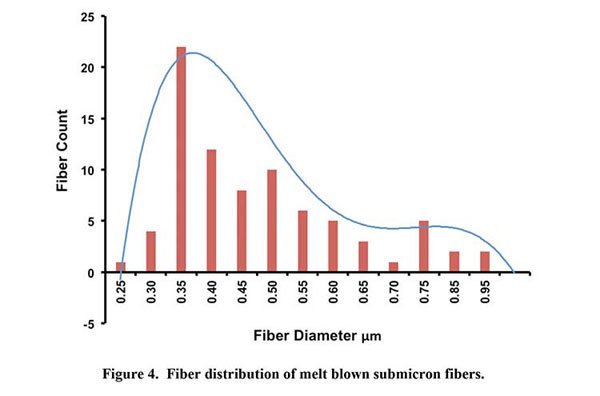 The submicron fibers provide the advantage as seen from many properties, especially the filter quality factor values compared to microfiber webs of similar materials [4]. Further investigations have been done with another modular die from Hills, Inc., that consisted of 100 holes per inch with very fine holes. Both the modular dies helped in the production of submicron fibers from typical commercial melt blown grade polypropylenes [5]. Unlike in the typical melt blown die, the modular dies have higher number of holes per cm, and the overall productivity is maintained. In fact, trials on the pilot lines demonstrated that production speeds could be more than 100 meters per minute if only a small amount of nanofibers are to be deposited on a nonwoven or any other substrate.

Summary
Modified meltblown process is a unique approach to produce submicron fibers at rates many orders of magnitude higher than that possible from electrospinning, at the industrial scale. One of the advantages of meltblown technology is the ability to handle many different polymers as well as blends of polymers. There are no issues of solvent handling in the process, residual solvent in the webs, and environmental pollution. So far, we have successfully and consistently formed melt blown submicron fibers from high melt flow rate PP, PET, PBT and PLA, to name a few. One has to remember that the melt blown process is suitable for only thermoplastic polymers. The results suggest that it may be possible to fit the commercial lines with modular dies and be able to continually produce submicron fiber webs. As the process seems to be technically and commercially feasible, further optimization of the process is needed and additional ongoing research will help find out possible challenges and appropriate solutions for successful implementation of this technology for large-scale production of submicron fiber nonwovens. 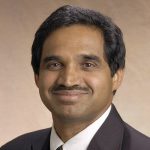 My research interests are in the areas of Process-Structure-Properties of Polymers, Fibers and Textiles. High performance fibers, especially the carbon fibers have been of special interest. Research is being conducted with PAN-based and Polyethylene-based precursors for carbon fibers. Melt spinning of thermoplastic polymers and effect of blends and additives in melt spinning is also a subject of current investigation. Other areas of interest include, processing of post-consumer recycled plastics, melt blown and spunbonded nonwovens, biodegradable nonwovens, extrusion coating, nanofibers and microtubes.