Polyester fibers and yarns dominate the global synthetic fiber industry and are forecast to increase their market share in the future. This is due to polyester’s unique, inherent properties such as excellent dimensional stability, high price/performance ratio, easy and quick fabric processing, adaptability for most technical applications, fashion-oriented product variety, durability, enhanced colorfastness, and easy care and crease resistance.

Most polyester yarns are dyed for the end-use textile material. An analysis of the colored yarn market shows there is a demand for competitive products, with the increasing impact of environmental costs a key factor. Meanwhile, sustainability is a major consideration to manage and develop.

As a result of polycondensation, polyethylene terephthalate (PET) contains hydroxyl (–OH) and carboxyl (–COOH) end groups. Neither is suitable for bonding ionic dyes, so PET is dyed with disperse dyes – unless it has been modified to contain ionic end groups.

Polyester yarn’s dyeing mechanism is based on the physical incorporation of disperse dye to the fiber/yarn structure. The yarn structure is opened by heat energy, then dye molecules penetrate into the amorphous regions and finally the structure is closed. The only way to dye polyester is to rely on van der Waals forces to hold the dyestuff within the fiber.

The stages of polyester dyeing are:

Difficulties in dyeing polyester yarns are due to their chemical properties, such as high crystalline structure, hydrophobicity, lack of functional groups to bond with dyes and the requirement for high temperature for yarn swelling.

To overcome these problems, Korteks’ low-temperature dyeing project aims to design a sustainable dyeing process that saves time, as well as saving costs and energy by using fewer chemicals.

The project’s main aim is to dye polyester at a temperature of less than 100 C with the same dye shade as at 130 C. Another target is to develop the dyeability of polyester and its blends, such as with cotton, polyamide, wool, etc., in a single dyeing process.

A further aim is related to fancy-effect polyester yarns: by combining standard and easy-dyeable yarn components in the fancy yarn, more intense and brilliant effects can be achieved.

In the project, a masterbatch was used as an additive in the trials. Masterbatch was fed in the extrusion step at melt spinning so a dye modifier can be incorporated into the PET structure.

The dyeing modifier acts to lower the glass transition temperature so amorphous regions of the yarn achieve more mobility at lower temperatures so yarn can take up the dye more easily and quickly.

Dyeing trials were performed at different temperatures with different colors (in most of these trials the easy-dyeable yarn has a good shade at 100 C).

The dyeing temperatures were dramatically reduced with this masterbatch additive. In addition, if easy-dyeable and standard polyester yarn is used in the fabric together, two shades can be achieved in a mélange appearance.

After achieving the first results, the project was enhanced a step further by creating two types of easy-dyeable yarn by increasing the additive content; these were called “easy-dyeable” and “compact-dyeable” yarns. By using easy-dyeable, compact-dyeable and standard yarns together in the fabric, three different tones can be achieved with only one dyeing process at 100 C.

In addition, fastness values of the developed yarns were measured. When the results were evaluated the washing fastness and lightfastness show little change (Table 1). Further, there was no significant difference in the results for the remaining fastness tests, which shows the project design works in real conditions.

Some fabric designs were prepared to determine the yarn functionality. In Figure 2, on the left is the raw fabric, but after one dyeing process three different colors are achieved in the fabric (right) by three different yarns at 95 C: light, medium and dark.

Apart from striped designs, rich patterns can also be achieved in fabrics made with easy-dyeable and compact-dyeable yarns (Figure 3).

The other key advantage is the use of easy-dyeable PET yarns in fancy-effect yarns: as shown in Figure 4, the effects are more apparent and intense.

In both spinning and dyeing processes, lower cost, capacity expansion and flexibility to dye polyester with other fibers were achieved. Further, yarn and fabric designs can be enhanced by deeper and intense colors with mélange effects.

This work creates a lower carbon footprint in both production and dyeing processes, resulting in a more sustainable and ecological dyeing process. 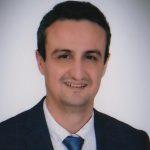