Ambitious global climate and energy goals and a growing environmental awareness among the populations of both industrialized and emerging markets are leading to an increasing number of countries committing themselves to minimize the consumption of fossil fuels.

Thermal insulation materials make it possible to reduce energy consumption through more efficient system design and are therefore widely used in society and industry. However, owing to the growing demands and complexity of systems, especially in industrial plants, new types of high-performance insulation materials must be developed. The use of established insulation materials is often limited by their weight, high thermal conductivity and /or low thermal resistance.

To achieve this goal, a manufacturing process was developed as part of the BMWi project EvA at the Institut für Textiltechnik (ITA) of the RWTH Aachen University to develop the production of highly porous aerogel nonwovens (Figure 1).

Aerogels are dried gels with a very high porosity, consisting of up to 99.9% air. As a result, they have a high specific surface area (SSA) and an extremely low thermal conductivity of up to 13 mW/(mK).

Compared with conventional materials aerogels exhibit remarkable thermal insulation properties, which resulted in the development of a nonwoven line for the production of continuous aerogel filament nonwovens. [KWM19]

The investigation into the technical production of aerogel nonwovens is based on the completed DFG project AeroFib. In this project, aerogel fibers from cellulose (a biological fiber material) were produced. The results of the study were used to adjust the filament properties, such as filament fineness, tensile strength and bending stiffness.

When the filaments are used as a nonwoven it is possible to form molded components for the encapsulation of a vehicle, for example. The drapability of textile structures can also lead to diverse applications.

In these experiments, cellulose is preferred because it can be dissolved in a salt hydrate melt made of zinc chloride tetra hydrate (ZnCL2 4·H2O), it is recyclable and it has been comprehensively investigated. [Fis04, Che91].

To increase the productivity and investigate the industrial upscaling of the wet-laid process, a pilot plant has been developed at ITA. The module for the automated production of the previously manually obtained nonwovens is shown in Figure 2.

The spinning nozzle is located below the non-solvent bath. The non-solvent is chosen with regard to the supercritical drying process. The coagulation of each filament starts under the guiding panel, and the wet-laid nonwoven is then wound on a take-up roller.

The main disadvantages of cellulose aerogels are their low mechanical properties. After the drying process, the nonwovens change to a crystalline structure, which leads to a loss of drapability; therefore, it has to be formed before drying. The coagulation is controllable, but the reaction occurs quickly, which can potentially destroy the filaments.

To avoid these disadvantages, the polymer was changed to polyacrylonitrile (PAN). For these experiments a solution was prepared with 20 wt% of PAN. The manufacture of direct wet-laid PAN nonwoven is shown in Figure 1.

During this process step, the cellulose fibers are still soft. BET analysis of the PAN aerogel nonwoven filaments shows a SSA of 202 m2/g. A high concentration gradient between the spinning solution and coagulation bath leads to fast diffusion of the solvents and non-solvent into and out of the filaments.

Macro-pores are formed, and the inner surface is reduced compared with fibers that have micro- and nano-pores. A computer tomographic (CT) image shows this in Figure 3. However, there is still space to improve on the PAN aerogel filaments by optimizing the spinning bath conditions, the spinning nozzle and the technical machine concept.

The current thinking is that a new nozzle design will need to be developed and validated by means of flow simulations. The quality of the mass flow is highly dependent on the use of a distributor plate. Therefore, an attempt was made to optimize the plate and the original idea of a beam nozzle design (Figure 4, left) was abandoned.

Owing to the demand for the smallest possible installation space for the nozzle, the original design was compressed. The simulation of the mass flow of the second conceptualized nozzle showed a homogeneous result – the calculation of the pressure during the spinning process is almost constant.
This work will continue and knowledge gained will be employed to explore industrial applications and collect further opinions to evaluate the aerogel processes on a semi-industrial scale.

The authors are thankful to the German Research Foundation (DFG) for the first Project AeroFib (FZK 179080540) – “Investigation of the synthesis, characterization and spinning of highly porous aero cellulosic fibers for use in technical textiles,” the German Aerospace Center (DLR) and the Federal Ministry for Economic Affairs and Energy (BMWi) for the funding of the Project EvA (FKZ 19U14008D) – “Efficiency-optimized combustion engine drive unit for the cold start, start/stop and hybrid operation,” and all their partners, including Aerogelex, ElringKlinger AG, NANO-X GmbH and ElringKlinger Motortechnik GmbH. 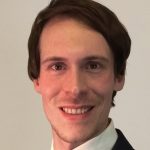 Daniel Wolters is currently research assistant at the Institut für Textiltechnik (ITA) of RWTH Aachen University. During his master’s degree in Chemistry, he focused on catalysis, materials and mesoscopic systems. In 2017, he began contact with ITA, where he finished his master’s thesis on the wet spinning of recycled polyacrylonitrile fibers in 2018. As a research assistant he began work on aerogels and focuses on the wet spinning of bio-based materials and polyacrylonitrile. He is particularly interested in aerogels and started further development of these materials in July 2020 with the Chrysomallos project. He can be contacted at daniel.wolters@ita.rwth-aachen.de or +49 241 802 3257.